Welcome to the reenactment of Lu's 5th Birthday party via the web!  We hope you received your invitation. 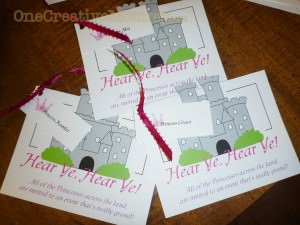 As each princess was dropped off by her carriage, she was announced by the Royal Conch Shell Player.  (I wish I had recorded that.  Daddy's pretty good with a shell!)  Then she was invited to color a Disney Princess picture while we waited for everyone to arrive.

Princess Lu announced that in honor of her birthday, she planned to share her royal treasure with all of her princess friends!  But first, the princesses each needed to decorate their own, personal treasure boxes. 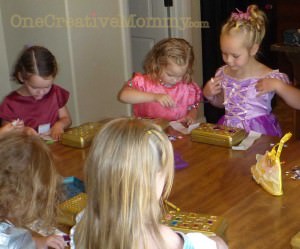 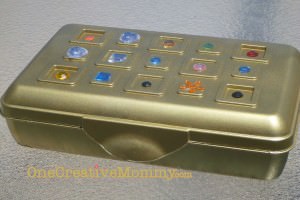 It was finally time to share the treasure, so the Princesses gathered around the piñata to claim their portion. 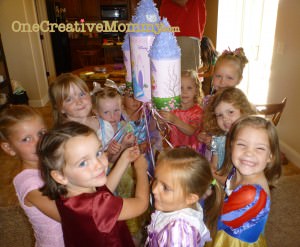 Something wasn't right.  The piñata felt almost empty!  All that came out were a few scrolls . . . and no treasure!  What could have happened?  The large scroll explained everything: 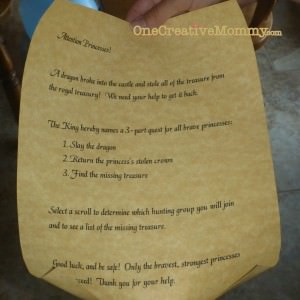 A dragon broke into the castle and stole all the treasure!  The king immediately ordered a quest to (1) Slay the dragon, (2) Return the Princesses' stolen crown, and (3) Find the missing treasure!  The brave princesses divided into two teams to begin the quest.  (The gold team played Princess Bingo while the silver team went first.  It's a good thing that we had two maidens from the village--Bear and her friend--to help!)

The dragon's lair was on the other side of the kingdom, so the princesses had a long way to travel!  They sneaked into his home and pelted him with (beanbag) stones.  The dragon was slain!  (Or, so they thought.  The second group had to hit him again when he woke up.) 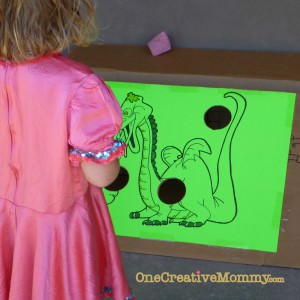 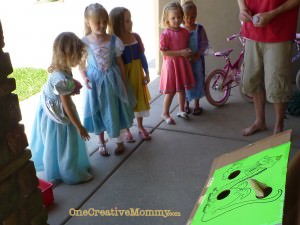 Next the princesses entered the dragon's lair to find the lost crown. 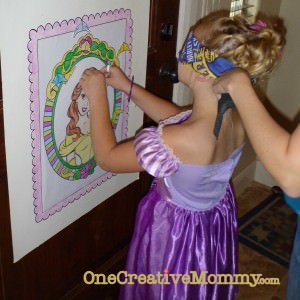 It was very dark (almost like the princesses were blindfolded), but brave Princess B was able to locate the crown and return it to its rightful place.  (These princesses now played BINGO while the gold team left to slay the dragon--again!  I guess it was just mostly dead.)

When all of the princesses had completed the first two parts of the quest, they hunted through the lair to find the missing treasure.  Luckily, the gold and silver scrolls from inside the pinata contained a picture list of the items they needed to find.  Treasure located--they traveled back to the castle, enjoyed cake and punch, and opened gifts.  It was quite the day in Lu's kingdom!  She was very grateful to her princess friends. 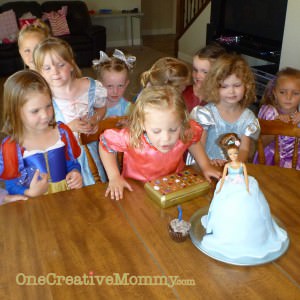 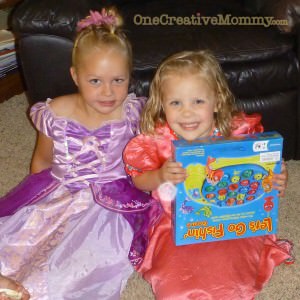 Tomorrow, this post will link to tutorials and free downloads for projects from the party.  See you then!